17.04.2022
Jeff Grant. the “Roger Federer of New Zealand Scrabble’ wins the Masters for the ninth time
Stuff – Scrabble legend gets in last word yet again…

15.04.2022
Olivia En is interviewed by TV3 at the Masters, and Scrabble gets promoted for youth by participants
TV3 – NZ’s only blind player is a Scrabble Expert

18.10.2021
24 Scrabble players from throughout the country attended the Dunedin club’s tournament held at the Wyndham Garden hotel in Remarkables Park
Otago Daily Times – Lynn Wood helping to ‘spread the word’ in Queenstown

30.08.2021
Paul Lister talks about how Scrabble can help to stave off dementia

NZ Herald, +Plus magazine – How Russian peasants can be good for your healthDownload

05.07.2021
NZASP President Howard Warner was spotted in this Stuff quiz. 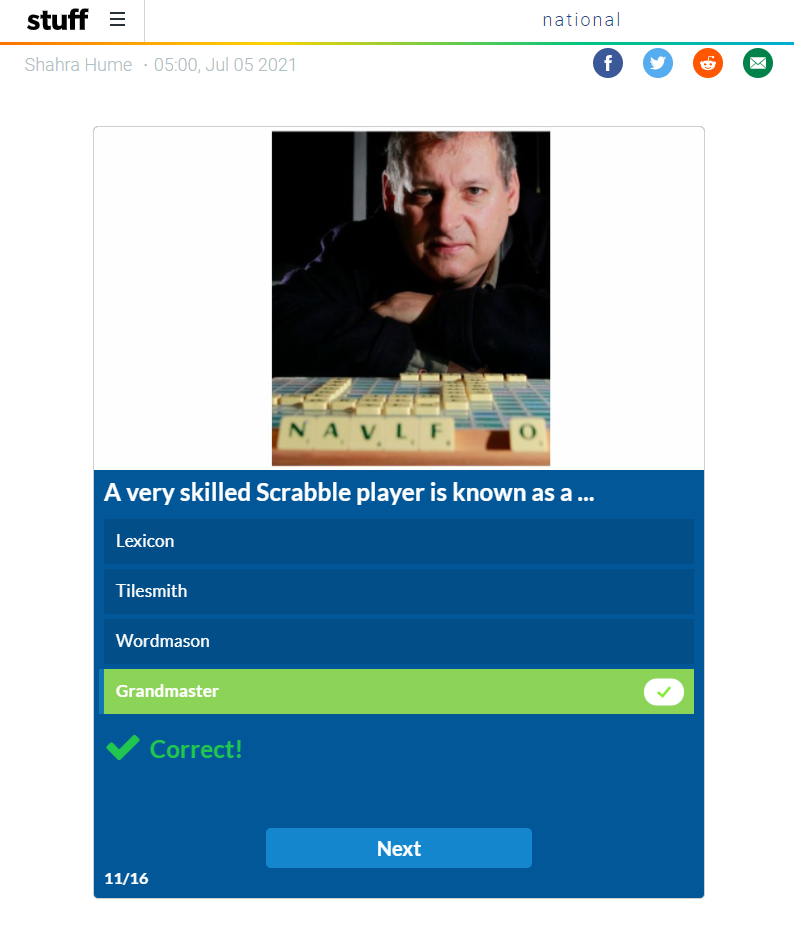 04.07.2021
Alex Casey (daughter of Auckland player Cathy Casey) writes in The Spinoff about the three-day 2021 National Champs, which took place in Hamilton over Queen’s Birthday Weekend
The Spinoff – A weekend with the super-brains of competitive Scrabble

29.06.2021
Howard Warner talks with Kerre McIvor about game owner Mattel’s decision to remove “slur words” from the Scrabble dictionary
Newstalk ZB – Should you be able to swear during a harmless game of Scrabble?

21.06.2021
Queenstown local picks up a couple of prizes in the National Champs in Hamilton
Mountain Scene – Tara scores a double

08.04.2021
The top 24 players in the country descend on Tauranga over Easter for three days of masters-level Scrabble
Sunlive – Scrabble mastery in Tauranga

15.10.2020
How cool to see Nigel Richards and Jacinda Ardern placed on the same level, as people who the rest of the world has heard of
Yahoo! News – Kiwis, scrabble and shearing: five things about New Zealand

14.10.2020
Sue McRae was all set to launch the Masterton Scrabble Club when the country went into COVID lockdown, but she kept trying
Wairarapa Times-Age – Third time lucky for club

07.06.2020
The organisers of the first ever Virtual World Cup of Scrabble give a shout-out to Kiwi Howard Warner (among others) for helping to make this event a reality
cocoscrabble.org – Getting underway at the Virtual World Cup

16.06.2019
Who is this Scrabble player that all other players are so in awe of?
ESPN, India – Nigel Richards: The Scrabble legend with few words to say but plenty to play

05.06.2019
Poet and Scrabble tragic Nick Ascroft tells the tale of his National Champs
Newsroom – Dopiest, dewiest, eggiest: our man at the Scrabble champs (by Nick Ascroft)

29.05.2019
How do Nick Ascroft and others prepare for tournament play?
Newsroom – How NZ’s 20th best Scrabbler gets in shape  (by Nick Ascroft)

21.04.2019
Alastair Richards and Lyres Freeth, ranked 1 and 3 in New Zealand, came together through Scrabble – four years later they are married and opposing each other in the NZ Masters
Whanganui Chronicle – Powerhouse couple brought together by the game participate in New Zealand Masters Scrabble Tournament in Whanganui

11.03.2019
“The great jandal scandal” – Howard Warner spends half an hour chatting with host Jesse Mulligan and answering questions from the public in Radio NZ’s ‘Meet the expert’ slot
Radio NZ – Expert on Scrabble

10.02.2019
Prominent Auckland city councillor Cathy Casey writes about her guilty passion outside of politics: Scrabble
The Spinoff – Bingeing on a triple-triple: True confessions of a Scrabble addict

19.12.2018
Wellington’s Dylan Early takes out the Trans-Tasman Challenge title, ahead of the best players from Australia and New Zealand
Otago Daily Times – Adroit use of ‘android’ wins Scrabble tourney

15.12.2018
‘Not Dead Yet’, a series celebrating “the many older people in our community defying their years to do amazing things”, shines a spotlight on Christchurch’s veteran Scrabbler Shirley Hol
The Press & Stuff – Scrabble queen Shirley Hol reigns supreme

16.11.2018
Preview of the biennial Trans-Tasman Challenge being held in Dunedin for the first time, and featuring the 12 best Scrabble players from each of New Zealand and Australia
Otago Daily Times – Scrabbling to claim title

24.10.2018
New Zealand’s Scrabble purists react to a mock-Scrabble product that game manufacturer Mattel has cynically aimed at the Christmas sales market
The Spinoff and Newshub – War of the Words: why the new Kiwi Scrabble edition has Scrabble fans furious

13.03.2018
Two-time World Senior Champ Howard Warner reveals his thoughts on how Scrabble changes at the highest levels of competition, and why the professional world needs to unify
Urbo – Tilin’ Out: A Conversation with a Champion Scrabble Player

31.1.2018
Nelson Scrabble Club convenor Tony Charlton on why he loves Scrabble and why it’s such a great game
Nelson Mail & Stuff – Memory boost from the game of life

23.11.2017
“The room may have been almost silent, but the words were flowing thick and fast at the 5th World Annual Senor Scrabble championship, held in Christchurch”
The Press & Stuff (video) – Scrabble sharks scramble for supremacy in Christchurch

28.08.2015
Literacy advocates waylay Wellington commuters to play a few turns on a giant Scrabble board laid out on the floor of the central railway station
Scoop Education – Celebrate International Literacy Day with a Giant Game of Scrabble

22.07.2015
Not content with winning the top title in English-language Scrabble, Nigel stuns the world by doing it in French too
DW – Non-French speaker wins French-language Scrabble world championship
NZ Herald – Kiwi Nigel Richards wins French Scrabble contest, doesn’t even speak French
BBC – New Zealand’s Nigel Richards wins French Scrabble crown
NPR – Winner of French World Scrabble Title Does Not Speak French
– Many other repetitions of this story from around the world, including Singapore, the UK, Germany, Ireland, the Czech Republic, Switzerland, the US and Canada.

08.08.2014
The heading speaks for itself
FiveThirtyEight – What Makes Nigel Richards The Best Scrabble Player on Earth

23.06.2014
“One of the most notable players here at the tournament is New Zealand’s Lewis Hawkins”
Felix (UK) – Scrabble world championship 2014: Grudge Match against an 8-year-old

04.08.2013
8-year-old Lewis Hawkins talks about why he loves Scrabble and what you have to do to be really good at it 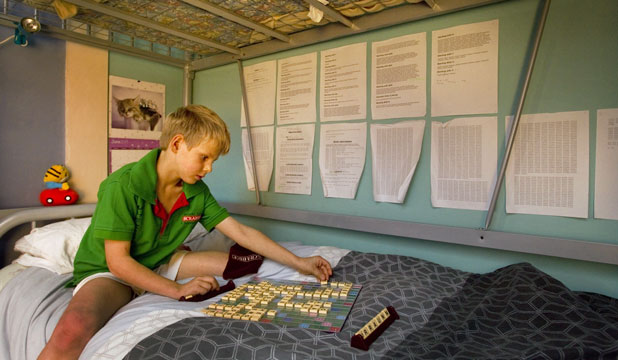 30.06.2013
Blue Thorogood, the 51-year-old driver of hazardous chemicals by day loves beer, fags and Scrabble by night
The Press & Stuff – The man who swallowed a dictionary

03.04.2013
Dunedin’s Alex Leckie-Zaharic, 12, is the youngest player to compete in the elite NZ Masters Scrabble tournament in its 30-year history
Otago Daily Times – Now it’s time for a word from young master Alex

31.03.2013
12-year-old Alex Leckie-Zaharic is the youngest player ever to qualify the National Masters Championship, in Whangarei
Sunday Star-Times – Alex not lost for words in Scrabble champs

25.10.2011
Whanganui Chronicle – Scrabble Stars as good as their words

31.08.2011
NZASP secretary Liz Fagerlund has been hooked on Scrabble since childhood
NZ Herald & The Aucklander – Under a spell

10.07.2011
The word “jandal” gets banned much to the shock and horror of NZ Scrabble players
Stuff – Scrabble jandal scandal

26.12.2010
Nigel Richards takes on the other nine former World Champions in the one-off ‘Tournament of Champions’ in Malaysia and triumphs with two games to spare
Stuff – Kiwi of few words crowned best Scrabble champ

06.06.2010
The most complete profile ever of Scrabble legend Nigel Richards – despite the writer not talking to the man himself
Sunday Star-Times – A way with words

25.05.2010
The Hennevelds of Rotorua have built a life around the mutual love of Scrabble
Rotorua Daily Post – Scrabble becomes couple’s way of life

08.04.2010
Coverage of the NZ Scrabble Champs in Christchurch, ahead of a reported major change to the world Scrabble dictionary
The Press & Stuff – Scrabble gurus lost for words

November 2009
Article written for the NZ Association of Gifted Children’s newsletter, by Howard Warner, on why Scrabble is such a great educational tool
Tall Poppies – Scrabble: the ultimate brain sport

24.08.2009
Local players hold their own against the star out-of-towners at the Whangarei Scrabble Tournament
Whangarei Leader – Word’s out on winners

31.01.2009
The host of newly introduced allowable words are the hot topic of conversation at the Hamilton Scrabble tournament
Waikato Times – Slang make them sic at Scrabble showdown

Prospect: an Australian journal of TESOLDownload