The 2021 Gladiators WESPA Championship is an online event being hosted on the Woogles.io platform. An individual rather than team event, it replaces the face-to-face WESPA Championship, last held in Goa, India in 2019.

The group stages of Gladiators will run on 20–21 November and 27–28 November. The knockout rounds – quarters, semis and final – will be held on 4–5 December.

A team from Pakistan will be hosting, directing and providing technical expertise for the tournament. In a new development for online competition, the tournament organisers, together with WESPA, have developed sophisticated anti-cheating protocols.

The NZASP has contacted the top-ranked New Zealand players.

25.07.2021: The Royal Scrabble Day at Royal Hotel in Featherston on Sunday 25 July was a fun event for 24 players from Wellington and Wairarapa, including 12 newbies. Nick Ascroft (pictured), nudged ahead in the tightly-contested FAST MOVERS group, Sue McRae was the luckiest of the WORD SPINNERS, first-timer Ruby Topia Aporo took out the MEDIUM PACERS group and Lynell Ellis triumphed in the FUN LOVERS section, scoring 2 bonus words in her first-ever tournament. 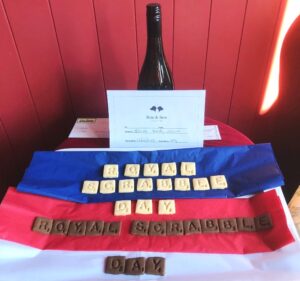 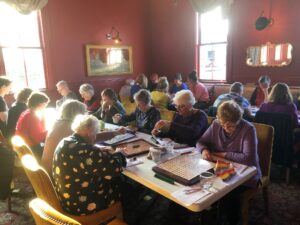 04.07.2021: Highlights from the Whangarei Scrabble Club tournament: Chitra Kartick received the Warner prize for Most Promising New Player; other new players Amrish Shreedam and Graeme Quinn; and long-time club member Lynn Thompson holding the coveted money tree that she won in a raffle. 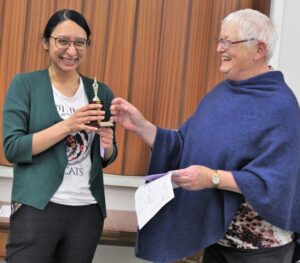 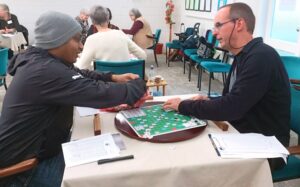 Queen’s Birthday weekend 5-7 June saw the return of our annual NZ National Scrabble Championship, and was held in the Cosmopolitan Club in Hamilton with over 80 players attending despite fog disrupting travel. Congratulations to all the winners! NZASP President Howard Warner is our 2021 champion, with 19 wins, a 2025 spread, 55 bonus words, and an average of 462 – all top scores to boot! Newly-elected Vice-President Cicely Bruce presented the awards.

Howard Warner – winner 2021      Dylan Early – 2nd A Grade     Karen Richards being presented her prize by Cicely for 1st in B Grade   Gil Quiballo – 2nd B Grade. NZASP Secretary Liz Fagerlund was scorer and adjudicator and played a huge part in the organization of the event. 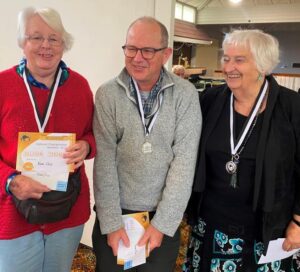 Lynn Wood won the Eileen McLean trophy (for the player who has played the most number of NZ tournament games (213) from the first tournament after the previous Nationals until the end of these Nationals). Lynn was also presented with her Gold Milestone Badge for 5000 tournament games achieved! Dylan Early won the Highest Game trophy (donated by the Grant family) with 657 points in his last game. Tara Hurley won the Georgie Trophy, given to the player with the biggest rating gain – Tara gained 188 rating points. The Kiwi Scrabblers won the Team prize including Jacqueline Coldham-Fussell, Barney Bonthron and Jennifer Smith. Vicky Robertson had the highest scoring word in B grade – 203 for OUTFOXED. Jason Simpson had the highest individual game score in C Grade of 542, Dianne Cole-Baker in E Grade had 543, and Awhina Taikato in G Grade had 541. Awhina also won the prize for the highest scoring word in G Grade – 167 for CREDIBLE.

We can now announce the dates of the Trans-Tasman Challenge 2021 (formerly 2020). It’ll be held in Canberra, 19–21 November. That’ll be two whole years (!) since Kiwis were last involved in a face-to-face international.

New Zealand has 10 places to Australia’s 16. Our selection will be based on the top 10 ranked players immediately after the Kiwi tournament, 7–8 August.

For those who don’t make the cut but are still keen to play an international tourney, the WESPA-rated, open ACT Champs will be held the same weekend, in the same venue. Kiwis would be very welcome.

More details about both events to come. But for those feeling starved of top-level play or starting to plan their summer holiday, it’s worth adding these dates to your calendar.

January 2021: The NZASP wish to congratulate Stanley Ngundi GM on achieving the status of Grand Master in 2020. This title is gained by attaining 5 separate post-tournament rankings in the top 10 over a 5 year period or 3 separate post-tournament rankings in the top 10 in the last 12 months. Stanley’s achievement of gaining the title in such a short time is most impressive.

December 2020: Lynn Wood was presented with a book voucher by Liz Fagerlund, for her valued service as past distributor of Forwords magazine, at the ‘Nearly Christmas’ Tournament, organised by Alastair Richards and Lyres Freeth at Murrays Bay.

A tribute to the late Simon Holdsworth.  25 June 1949 – 14 November 2020.
Simon was the patron of the Mt Albert Scrabble Club in the 80s and 90s. For many years, Thos Holdsworth and Sons (now Holdson) supported the club in many ways. Prizes of puzzles and games were provided generously every year. Tiles and Scrabble sets were made available. For this the club will be forever grateful. Roy Vannini remembers these occasions well….. “always a smile and best wishes from him in all our dealings.” John Foster recalls a meeting with him to discuss sponsorship for the 3rd World Champs in 1995. After fully sponsoring the travel and accommodation for the first two World Championships this unfortunately came to an end with Mattel NZ taking over.

“During the first World Scrabble Champs in London in September 1991 the New Zealand and Aussie teams went out for dinner one evening at an exclusive restaurant featuring some very exotic dishes. We were joined by Simon Holdsworth and his wife, and everyone enjoyed a most entertaining meal and more than a few drinks. The prices weren’t cheap though and some of us were wondering how much we would have to fork out. At the end of the night, Simon picked up the tab and paid the lot – over 500 pounds! It may have been ‘business expenses’, but still a very generous act and certainly my most enduring memory of Simon Holdsworth.”

Lynne Butler recalled that night. She said she’ll never forget her amazing salmon meal, quite something. The first and only time she had the pleasure of meeting Simon.

Providing the NZ Masters trophy, ‘The Holdsworth Shield’, was another one of his fine gestures, along with the usual stack of games and puzzles for both the Masters and the National tournaments every year. There will be many Scrabblers out there with a Holdsworth and Sons jigsaw puzzle or game in their homes as a result.

I, personally, have memories of meeting him round the company Board table while President of both the Mt Albert club and the NZASP.

A more professional and amenable person I have never met. Always so accommodating and helpful. A true gentleman.

Our thoughts go out to his family and all those involved with Holdson’s as I know how much they respect and adore this man.

02.11.2020: The Association received an email from Chris Lipe, Chairman of WESPA …
“It is with sadness that we must announce the cancellation of WESPAC 2021 due to the ongoing COVID-19 pandemic. In normal circumstances, preparations for the WESPAC, to be held in a year’s time, would be well underway. Dates would be announced, venues and lodging would be arranged, and the qualification schemes for every member organization would be in full swing. Early entrants would be sending in their fees and booking their flights. In this difficult year, however, we have been unable to begin even initial planning. International travel will be highly uncertain for the foreseeable future and major populations of players in America and Europe are looking at dire rates of new covid cases and new lockdowns. Even if planning could occur on a contingency basis, domestic tournament play will be slow to resume in much of the world in 2021, making a fair qualification scheme for WESPAC impossible for member nations to implement. We look forward to Michael Tang’s Alchemist Cup, scheduled for late 2022, and will move forward with the process to plan WESPAC 2023 when the time is appropriate. WESPA Member Nations should also note that the 2021 WESPA BGM will take place virtually in late 2021. Details about nominations for WESPA positions and attendance via Zoom will be sent out in the second half of 2021.”

Thanks to Sue McRae, the Masterton Scrabble club will now launch on Wednesday, October 28, from 2-5pm, at the Masterton District Library, 54 Queen St, Masterton.

Contact Sue on 027 4490 601 or sue.mcrae.nz@gmail.com if you would like to join, and read her story in the Wairarapa Times-Age: https://times-age.co.nz/third-time-lucky-for-club/

20 September 2020: Clare Wall was presented with a beautiful potted orchid, in recognition of her hard work after her retirement as dedicated Webmaster and Executive member, at the recent Wellington tournament.
Clare is still joining up members with Slack, so contact her on our Slack page for more info.
Learn how to use Slack here

WESPA has met with all member countries (including New Zealand) to discuss Hasbro/NASPA’s proposal for purging their dictionary of “offensive” words. All countries, as well as the WESPA dictionary committee, have voted overwhelming against expurgation in our dictionary/word list. This view will be put to Mattel/Collins. In the meantime, our word list remains untouched.

13.08.2020 (5-8pm): The new Masterton Club will be launched at the Masterton District Library’s new Learning Centre. Former Wellington player Sue McRae is organizing the new club, and we wish her all the best with the launch!

The Milestone Badges Awards were initiated by our President, Howard Warner, and were recently awarded at the Whangarei Scrabble Club, preceding their tournament on 04 July 2020.

John Foster, Rosemary Cleary and Lyres Freeth weren’t present, so we would like to extend our congratulations to them, and they will receive their badges at their next tournament.

Betty Eriksen also received the Eileen McLean trophy from Liz Fagerlund, for the person who has played the most number of tournament games in NZ from the first tournament post Nationals, up to and including, the following Nationals. There were no Nationals this year, so up to the last tourney that was prior to that). It was very close this year with Betty pipping her rivals at 171 games. Congratulations again to all!

We received this message on 30.06.2020 from Michael Tang , the organizer of the Alchemist Cup – “Due to many uncertainties caused by COVID-19 pandemic, I am sorry to inform that Alchemist Cup 2020, which is supposed to be held from 2nd to 6th December 2020, will now be cancelled. Please stay Safe and Healthy.” A disappointing outcome, but a safe decision.

We are pleased to announce that Dylan Early has accepted an offer to join WESPA’s Dictionary Committee. His breadth of experience and dedication will be invaluable. Congratulations, Dylan. The other Kiwi to serve on a WESPA committee is Liz Fagerlund (Rules).

The Collins Coalition are going to direct a Virtual Scrabble World Cup! For this tournament, teams of 5 players from 16 countries will compete in a bracket format. Keep up with their blog post for more information, and on the Virtual Tournaments web page. Registration closes very soon on July 5th. For players whose WESPA rating is not high enough to qualify as one of the top 5 players in their country, they are considering directing a companion CURE tournament in the next couple months if time is on their side. Until then, happy Scrabbling!

THE NZASP NATIONALS that were to be held traditionally on Queen’s Birthday Weekend in June 2020 were CANCELLED due to Covid 19 lockdown requirements and will be rescheduled for same time in 2021. The good news is that we are back to Level 1 as from midnight on 08 June 2020 and NZ clubs can resume hosting their tournaments with no restrictions! Please contact your club secretary, or the NZASP secretary, Liz Fagerlund, for more info …  EMAIL

Official website of the NZ Association of Scrabble Players