Club Scrabble in NZ – how it works

The four blokes are all migrants (with a penchant for Scrabble) that are now happily settled with families in NZ, and the NZASP all the richer for their membership. 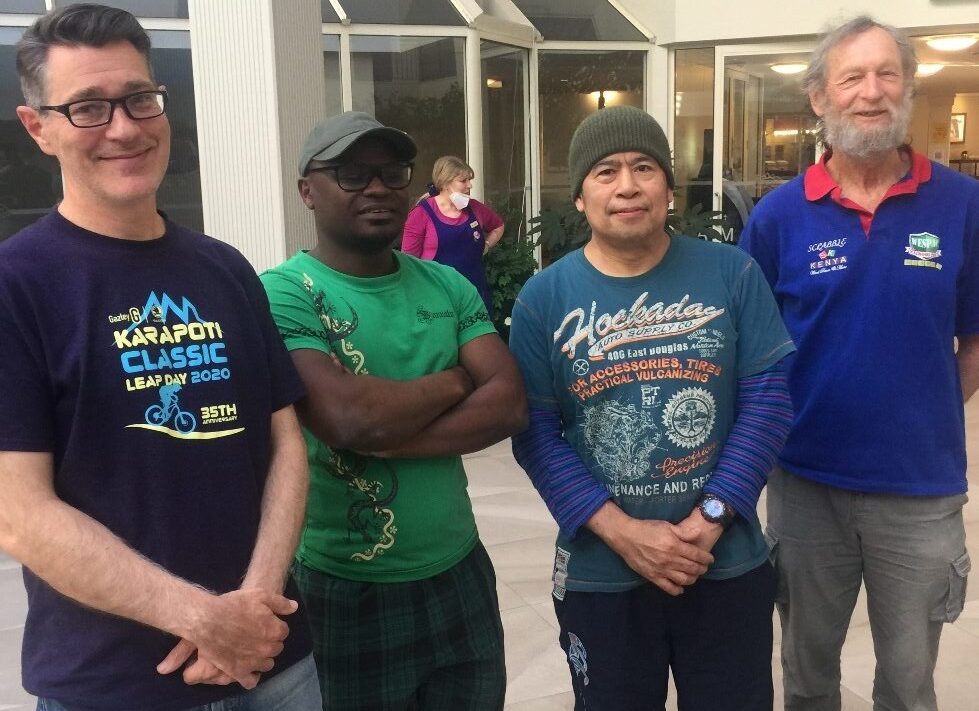 Organized Scrabble is a little different from the game most of us start off playing at home or on our electronic devices. If you’ve reached your peak among friends and family and need fresh challenges, why not try a club. You may be surprised how much more there is to the game. You’ll also be pleasantly surprised how quickly you raise your own level after a few weeks.

This is what to expect from Scrabble club play:

We only play one on one. At a club it’s common to play without time limits. However, if you eventually decide to enter a tournament, each player has 25 minutes to make all their moves (timed using chess clocks). We never time individual turns.

We use rotating boards with ridges that hold the tiles in place as the board moves. We use bags to hold tiles. We also have ready-printed scoresheets. Clubs usually have all the boards, tiles, scoresheets and other supplies on hand, so you don’t need to bring your own.

In New Zealand – as in most parts of the world – everyone uses Collins Official Scrabble Words 2019 as the word authority. This avoids fights over whether a word is allowable. Every club has copies of CSW19 (both the word list and the full dictionary) on hand. In most clubs, new players may refer to word lists for a while till they build confidence and a store of new words. More experienced club players – and tournaments – use a challenge system. If your opponent plays a word you’re not sure of, you can challenge it. If the word turns out to be correct, your opponent adds 5 points to their score. If the word is incorrect, your opponent loses their turn. It’s cheap to challenge – don’t be afraid to!

Larger clubs organise competitions and ladders for their members. Others are more casual and random. You’ll find players of all abilities. You’ll probably be matched up against other ‘newbies’ at first so you don’t get overwhelmed. We want you to feel comfortable and have fun – as we do. Later you can try your hand against more experienced players.

If you want to improve, start learning the short words. After a few months of playing, all players should know the 130 or so two-letter words. After those, try to learn some of the 3s and 4s. There are many word lists and programs around that can help.

If you want to challenge yourself further, enter a tournament. (Your club will help you.) Most tournaments in New Zealand are open to all players. At first you’ll play others at the same level as you. As you get better, you’ll move up the grades. Tournaments are a great way to meet players from all around the country – and even overseas.

Contact a club near you to find out what they can offer you.